This is my third blog based on the monthly workshops and international webinars that I run – it will be ‘Organisations & Institutions in January.

A criticism sometimes levelled at transactional analysts is that they are out of touch with the ‘real world’ and pay attention only to the people and not the practicalities of organisations. Julie Hay responded to this by developing a model she calls Sailship Success, which uses the metaphor of a sailing ship to represent an organisation. A metaphor is a way of understanding and experiencing one kind of thing in terms of another. This has benefits in terms of prompting people to step outside their current perceptual limits and to ‘see’ things in new ways – enabling them to identify both problems and options that they may have been overlooking. The Sailship Success metaphor contains elements of the ship and those who sail it, and of the sea and the weather, that can be taken to represent a wide range of aspects related to organisational cultures, structures, operations and personnel.

This particular metaphor, therefore, prompts leaders to consider the more strategic elements of their leadership role and not just the ‘soft skills’ associated with leading people. It also reflects reality in that a ship must make its way on an unpredictable ocean, just as leaders can never predict with total certainty what aspects of the environment might impact next on their organisation. Leaders, and groups of leaders, can be invited to consider each part of the metaphor in turn, in terms of what they have now, what might happen in the future (positive and negative scenarios), what they are able to change or at least influence, and what they need to do about any of this. 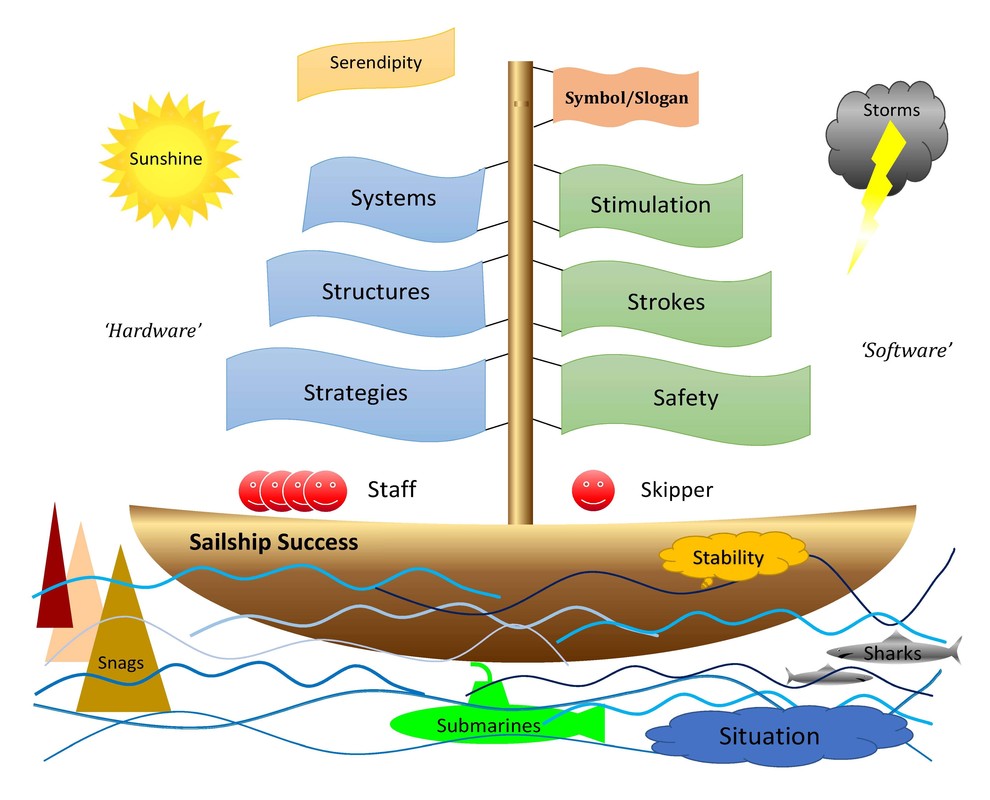 Keep in mind that schools are organisations, as are psychotherapy centres. There are many different kinds and sizes of ships. Even independent practitioners and contractors can be thought of as small boats, and maybe even canoes. Partnerships might be catamarans. In such cases, you might consider the nature of the larger ships you are sailing alongside, and what it is like when you tie up alongside or when you spend time aboard the larger ship that may be your client organisation.

The situation becomes the sea; snags (or obstacles) are shallows, sharks or even submarines (containing spying competitors); we need stability to cope with the waves of change; and serendipity refers to the weather, which may be storms or sunshine because luck does seem to be a factor in the success or failure of some organisations; we cannot always forecast or control events.

The people on board have the skills, strengths and shortcomings, and on the mast there may be a slogan and a symbol; these latter are important in terms of the culture of an organisation.
In addition to the elements shown in the figure as part of the ship, we can pay attention to whether our organisation is a solitary ship or part of a fleet. Do we belong to a multi-national, where we have many ships that are scattered widely around the globe? Are we part of a more localised fleet? How large is our ship compared to others in the fleet? Are we safely in the centre with others around to protect us or are we on the fringes where we may be one of the early casualties if the organisation decides to divest itself of us or we may be boarded by pirates who are mounting a take-over bid?
​

​We offer CPD and’ taster’ opportunities as well as ongoing qualification programmes.   We expect participants to try out before they commit to more.

​Click here to see how you can choose topics that interest you now and have your attendances credited later if/when you decide to continue.

Necessary Always Enabled
Necessary cookies are absolutely essential for the website to function properly. This category only includes cookies that ensures basic functionalities and security features of the website. These cookies do not store any personal information.
Non-necessary
Any cookies that may not be particularly necessary for the website to function and is used specifically to collect user personal data via analytics, ads, other embedded contents are termed as non-necessary cookies. It is mandatory to procure user consent prior to running these cookies on your website.
SAVE & ACCEPT